It has been decided for a desk calendar, containing many offshoot photos which were not included in the magazine, as well as a diary notebook, which is useful for managing your every day schedule, to be released 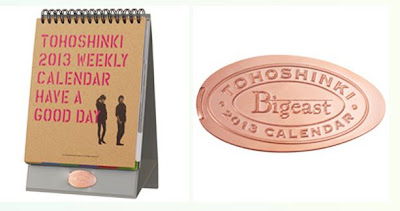 Removable booklet within a classy zipper cover made from synthetic leather.
A total of 184 pages including yearly, monthly and daily planners, personal data and note paper.
Aside from your personal schedule it is also perfect for recording Tohoshinki’s tour and event dates as well as their release dates.
April 2013 to April 2014.
[Size]
Cover: Length 203mm × Width 166mm × Thickness 18mm (approximately)
Booklet: Length 182mm × Width 130mm × Thickness 12mm (approximately)
Sale Begins: 2 Feb (Wed) 16:00 – TBC
★Bigeast Official Shop
［PC］http://shop.mu-mo.net/avx/sv/list1?jsiteid=BGFC&categ_id=6157
［MB］http://m-shop.mu-mo.net/avx/sv/list1?jsiteid=BGFC&categ_id=6157
※Displays will begin when sales open
※Both products are limited to members of Tohoshinki’s offical fanclub, “Bigeast”
※Each member may purchase one of each item
※Sales at tour venues have not been confirmed. We will announce it once details have been finalised.
※Please note that as these items are available in limited quanities, they will only be available while stocks last.
※Also on 2 Feb, the “Jumbo Towel -BLACK-”, limited to members of more than 2 years, will also go on sale.
For details on the “Jumbo Towel -BLACK-”, please refer to the website for Tohoshinki’s official fanclu “Bigeast”.
http://fc.avex.jp/bigeast/
Source: [Tohoshinki Official Site]
Translated by: dongbangdata.net
Facebook Twitter Google+
﻿
TVXQ's Changmin and Super Junior's Siwon to enlist quietly on November 19th