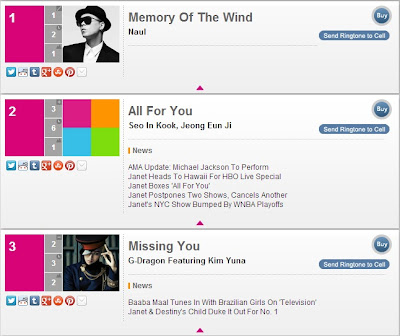 Brown Eyed Soul’s Naul has been maintaining an impressive 1st rank on Billboard‘s ‘KPop Hot 100’ chart for the past two weeks.

According to the chart ranking for the week of October 13, Naul’s “Memory of the Wind”, the title track for his first solo album ‘Principle Of My Soul’, placed first on Billboard’s ‘Kpop Hot 100’ chart for a second week in a row.

Climbing one spot to No.2 was “All For You” by Seo In Guk and A Pink’s Jung Eunji, while G-Dragon’s “Missing You” featuring Kim YunA dropped one place this week for a No.3 finish.

Aside from GOT7, SEVENTEEN also made it on a Billboard chart.  Read more
17 CARAT World Albums billboard Jul 25, 2015 05:00
GOT7 lands a spot on Billboard music chart

GOT7 landed a spot on Billboard.