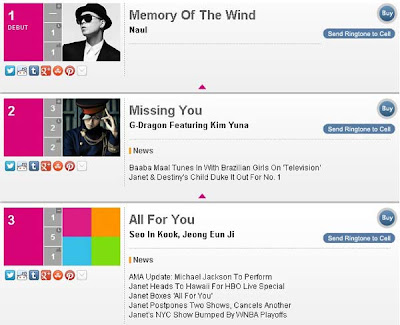 Brown Eyed Soul’s Naul proved himself one of the strongest vocalists by making a strong debut at No. 1 on this week’s Billboard chart.

According to Billboard’s latest chart rankings, Naul’s “Memory of the Wind”, the title track for his first solo album ‘Principle Of My Soul’, took the throne on the site’s K-Pop Hot 100 Chart for the week of October 6th. In doing so, he pushed down the 2-week winner, Seo In-guk and A Pink’s Eunji’s “All For You”, to the third spot.

Naul’s other tracks “Missing You” and “Farwell Start” also debuted in 6th and 10th place respectively.

Aside from GOT7, SEVENTEEN also made it on a Billboard chart.  Read more
17 CARAT World Albums billboard Jul 25, 2015 05:00
GOT7 lands a spot on Billboard music chart

GOT7 landed a spot on Billboard.

What can you do to earn a raise at work?
billboard  brown eyed soul  naul Jun 05, 2020
Trending