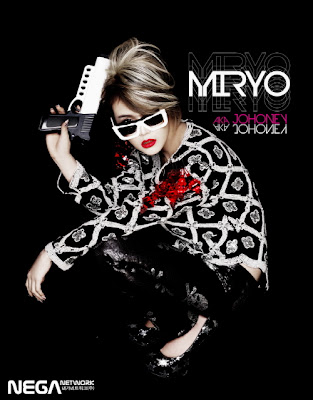 Look's like Brown Eyed Girls member Miryo will be having a rocky start at her solo debut. It has been revealed that her first solo album "revenger" was not able to pass the restrictions from the deliberation on broadcasting company SBS. Her agency revealed on the 31st of January saying, "Miryo's solo album revenger has been banned from broadcast on SBS. The officials from SBS said that the lyrics of the song has meanings of violence."

It seems that the dark lyrics of the title song from Miryo's solo album contained messages depicting violence and even suggested suicide at some point in the lyrics because the song is about a woman expressing her feelings from a breakup.

The official continued, "We have not yet received news from MBC and KBS, it seems that they are having a hard time making a final decision. Meanwhile, Her schedule will continue as planned, she will reveal her title track "Dirty" this coming February 1."

On December 24, Brown Eyed Girls held a 19+ rated concert named "Tonight 37.2° C" at Central City Millennium Hall, Banpo, Seoul.Having met their fans after almost 2 years, Brown Eyed Girls attracted a lot of attention because they are the first girl group to organize a concert 19+ rated concert in Korea.In particular, Miryo's shocking hairstyle is one of the most discussed topic.Many netizens commented about her hairstyle: "I'm shocked, Miryo shaved a half of head!", "Sandara Park's  inspiration", "So sexy", etc ...The concept of this concert is "Until death separates us apart" (Mors Sola), all the performances were devided into 4 parts 'Temptation', 'Passion', 'Betrayal ' and 'Revenge'. In addition to the group performances, fans also got to watch their individual and many never-seen before performancesSource: bnt newsWritten by Jenny@dkpopnews  Read more
miryo Brown Eyed Girls Dec 28, 2012 05:38
Narsha and Miryo pucker up for a kiss??

On the 3rd of September, Narsha updated her twitter account and shared, "Went to take a photo on the sticker booth and appeared in the front row again" and shared a photo of her sticker photo with  Brown Eyed Girls members.  Read more
miryo Gain Sep 03, 2012 09:00
More Stories >
Follow Us