[DaumCafe] Donghyun thanks Bestfriends for cheering them!

On January 20th, Boyfriend's Donghyun posted a new message for their fans on Daum Cafe.
Read his message below. 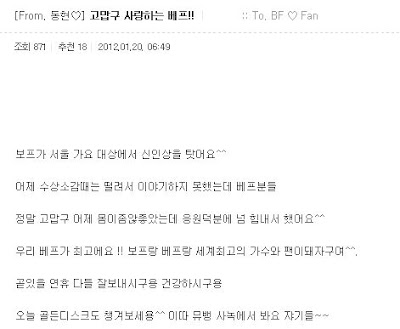 Boyfriend received the Newcomer Award at the Seoul Music Awards^^
Yesterday during the acceptance speech I was so nervous and couldn’t speak but Bestfriends, thank you so much.
I wasn’t feeling especially well yesterday but I was able to get stronger because of the cheers^^
Our Bestfriends are the best !! Boyfriend and Bestfriends have the world’s best relationship as singers and fans^^.
Holidays are coming soon so spend them well and stay healthy
Please watch the Golden Disk awards today too^^ See you later at the Music Bank recording babies*~~
trans by jaein @boyfriend-translations
source: boyfriend’s daum cafe
Shared by: angelclowie18@dkpopnews.net
Facebook Twitter Google+
﻿
Boyfriend Donghyun cast for musical 'Brothers Were Brave'

Boyfriend Donghyun is nabbing his 3rd musical 'Brothers Were Brave' and this time he's among the leads.

Donghyun is playing the role of one of the titular brothers, Jubong, an intelligent Seoul University graduate who has a hot temper. The story revolves around the reunion of two brothers after 3 years, with Jung Junha as Seokbong (Jubong's older brother).  Read more
Boyfriend’s Donghyun boyfriend Jun 29, 2015 08:30
Boyfriend Hyunseong thanks fans on his birthday

Boyfriend's Youngmin has been confirmed to join the cast of KBS's new drama 'Protect The Family'.

According to the officials from KBS, Youngmin has been casted as Go Chan Young for 'Protect The Family' which will go on air in May.  Read more
Protect The Family boyfriend Youngmin Apr 06, 2015 06:00
Boyfriend's forest version of 'Bounce'