[News] BOYFRIEND Youngmin snaps a picture of, 'the gentleman is coming' 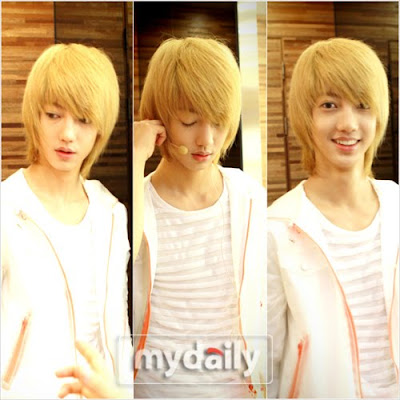 On the 10th, Youngmin's agency, Starship Entertainment, revealed a picture of him, who was getting ready to get on stage in the waiting room.

In the picture, Youngmin is seen with his yellow-dyed hairstyle, an enchanting smile on his face. With his small face and sharp features, he caught the attention of the female fans.

The hearts of the female fans are wavering as Youngmin and Kwangmin of their predebut past was before revealed as they had appeared in more than 300 commercials.

Netizen's reaction after they saw the picture was 'How can a man has such long eyelashes?' 'I want to drown into those eyelashes' 'It's a handsome piece, the gentleman is coming'

Less than a month from their debut, BOYFRIEND already has a variety of nicknames such as 'NamChin-dol' (Boyfriend-dol) 'AeWan-dol' (Pet-dol) and they are still active in promoting their tittle song 'Boyfriend' through various of music programs.

Boyfriend twins Youngmin and Kwangmin confessed that they got their first kiss stolen by a nuna staff. on KBS 2TV 'Hapy Together 3' aired on the 23rd.  Read more
youngmin. boyfriend kwangmin Jun 24, 2011 10:03
[News] BOYFRIEND, ulzzang twins and Kim Kabsu, take a picture "Are they father and son

On the 10th, Youngmin's agency, Starship Entertainment, revealed a picture of him, who was getting ready to get on stage in the waiting room.  Read more
youngmin. boyfriend Jun 14, 2011 11:38
More Stories >
Follow Us