[News] BOYFRIEND, ulzzang twins and Kim Kabsu, take a picture "Are they father and son 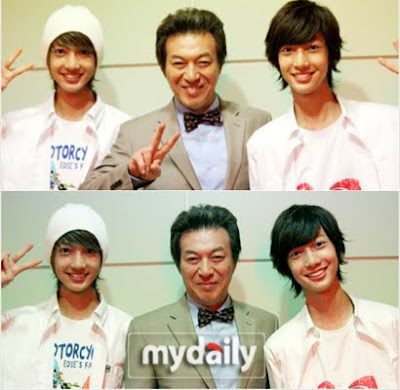 As soon as they debuted, BOYFRIEND became the hottest idol group, ‘uljjang’ twins Youngmin and Kwangmin(16) snaps a friendly picture with actor Kim Kabsu and it’s receiving lots of attention.

From their recent shooting of ‘All My Love’ they posed friendly in the picture which is taken at the scene.

The ‘uljjang’ twins, Youngmin and Kwangmin are one of the casts for ‘All My Love’ and they always show respect to actor Kim Kabsu whenever it’s photo time or recording time.

Fans who saw the picture shows a great interest and commented “It emits a pleasurable and sparkling view that I like” “Is this a picture of a father and his sons? The way they smile have the resemblance” “Ulljang twins, I will always watch ‘All My Love’ now”.

Last month, BOYFRIEND debuted with their song ‘Boyfriend’ and their promotion activity is still in progress.

Boyfriend twins Youngmin and Kwangmin confessed that they got their first kiss stolen by a nuna staff. on KBS 2TV 'Hapy Together 3' aired on the 23rd.  Read more
youngmin. boyfriend kwangmin Jun 24, 2011 10:03
[News] BOYFRIEND, ulzzang twins and Kim Kabsu, take a picture "Are they father and son

On the 10th, Youngmin's agency, Starship Entertainment, revealed a picture of him, who was getting ready to get on stage in the waiting room.  Read more
youngmin. boyfriend Jun 14, 2011 11:38
More Stories >
Follow Us