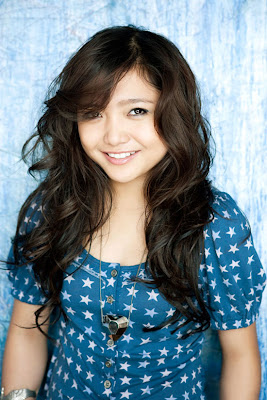 Asianbuzz: Thank you so much for accepting this interview. Your fans would like to know direction you will be heading career wise.

Charice: As of now, all I can say is that I am still continuously pursuing my passion which is singing. Of course, I would also love to penetrate the international market and be recognized outside the Philippines - that’s one of my dreams that’s why I’m still keeping my fingers crossed to achieve that goal. I would love to sing different genres too so I’d be more equipped to sing different kinds of songs.

Asianbuzz: Do you plan to develop your music career in Asia first or would you immediately branch out to the US?

Charice: I actually don’t know how I would answer that. But going international really excites me.

Asianbuzz: Gifted with such wonderful voice, who would you dream of having a duet with?

Charice: Whoah! I am dying to meet and sing with Whitney Houston. She’s like my greatest musical influence since ages ago. Hmm..who else? I also like to have a duet with Beyonce, maybe not only sing with her but also shake a booty with her. (laughs). I also would so love to sing opera with Andrea Bocelli.

Asianbuzz: If you’d have to learn another language for your career, which language would you select?

Charice: Hmm… maybe Korean. I don’t know, there’s something with they way they talk that really sounds good to my ear.

Asianbuzz: Your fans really want to know about your experience flying to Korea for Star King. Can you give us a recap from the arrival to departure? (Can you share some photos with us? )

Charice: When I arrived at the airport, a group of Koreans approached me and asked me if I were a celebrity. Then of course, I said no and that I was from the Philippines and was only visiting their country. Then they said I looked like one and they thought I was a Korean too. Maybe because of my eyes? (laughs)… I stayed in a hotel and did some practice for the song that I sung. The next day was the performance day. It was actually fun. I got to meet a lot of Korean stars. I even saw the Kim Jung-Eun. I used to watch her before because Lovers in Paris was shown here before in the Philippines.

Asianbuzz: Can you describe your experience for the taping of Star King? Can you share some interesting or funny things that happened behind the scenes? We thought you did great despite having language barriers with Koreans

Charice: The taping was fun. The audience really surprised me. They were like rocking the whole studio every performance they saw. Of course, I was happy that I got the loudest cheers and yells. It really boosted my confidence to really sing my heart out. Behind the scenes? Hmm, I had a translator which was my first time to experience; I mean that kind of exchanging thoughts and stuff. It was really fun.

Asianbuzz: Did you know about Super Junior before you met them? What are your thoughts about them? (The fans are gushing that you met them : ) )

Charice: No, I didn’t know anything about them, honestly. But before I went on stage, I kind of wanting to meet them face to face because of the things that my translator had been telling me about them. That they are very big in Korea. Finally, I had the chance to meet them after the taping. They were all nice but I must say KyuHyun really stood out because he was the one who was always smiling and talking to me.

Asianbuzz: Some source state that you will be signing up as SM Entertainment’s trainee. Is there any truth to this? If so, can you share more details? Charice: Hmm…Yes, they did ask me to join them but it still seems far-fetched as of now because I’m still a contract artist with a local label here and it will be until May next year that my contract ends. So that only means that I can’t sign up with another talent agency as of now.

Asianbuzz: Your popularity has reached the US at some level partly because of YouTube. What are your thoughts on that?

Charice: I’m really happy. I never thought I would be recognized outside my country. Of course, I have to thank the person who started it all for me in the cyber world – FalseVoice of YouTube. You should keep on watching his channel if you want to watch more of me.

Asianbuzz: Any upcoming projects that you want to share with your fans?

Asianbuzz: Thank you so much, Charice. Asianbuzz will be launching asian-buzz.com/buzzforum soon. We’ll start a forum for you. We hope you can drop by from time to time to say hello. Keep up the great work!

Charice: Thank YOU. I really appreciate all the love and support that all my fans have been giving me.